THE POPULIST RESPONSE TO THE COVID-19 PANDEMIC: A COMPARATIVE ANALYSIS OF THE POSITIONS OF DUDA AND FERNÁNDEZ

Drawing on the theory of political myths and qualitative source analysis, this article compares political mythologies created by the presidents of Poland and Argentina. The main argument is that they struck populist notes by using conspiracy, saviour, unity, . . .

In the European Union, healthcare and public health are mostly within the competence of Member States. Still, in a number of sub-domains, coordination between Member States led to the adoption of legislation that formed the healthcare acquis, together with . . .

FALLINGBEHIND: THE EUROPEAN UNION TRADE STRATEGIES FROM 1999 TO 2021

As one of the most important global trade actors, in the period that lasted from 1999 to 2021the European Union promoted five different trade strategies. Some of them, such as the strategy of “managed globalisation” (of 1999) and “Global Europe” (of . . .

INTERNAL AND EXTERNAL BARRIERS TO EMPLOYMENT OF PWD: A CASE STUDY OF BOKA KOTORSKA (MONTENEGRO)

This paper presents an overview of a research study on the position of persons with disabilities (PWD) in the labour market of the Boka Kotorska region, in the municipalities of Tivat, Kotor and Herceg Novi. This original research study is based on an analysis . . .

The paper deals with the theoretical and legal practical foundation of the concept of alternative care for children in the social welfare system. Applying the human rights principle and child best interest doctrine along with the contemporary holistic and . . .

A CRITICAL ANALYSIS OF CONTEMPORARY COUNTER-TERRORISM

In this paper the author analyses the contemporary counter-terrorism  especially in the context of relevant international and national regulatives. The author first considers counter-terrorism measures in investigation of crimes of terrorism. In the name . . .

After decades of marking the Kurds as an existential threat to Turkey's territorial integrity and ontological security, a new peacetime period is coming, accompanied by peace initiatives and the conflict's de-escalation. Taking into account the fact that the . . .

NATURAL GAS AS A SUBJECT OF GEOPOLITICAL INTERESTS OF STATES

In the last decade, the subject of sale, purchase or transit of natural gas between the countries in Europe has gained, in addition to the economic dimension, a much broader, and for some countries even more significant, geopolitical dimension. This is most . . .

The paper aims to explore which situations the state can exercise political power over its citizens. The art is to find the fine line between citizens' rights and state coercion. The best way to present an answer to this issue is by examining the principles . . . 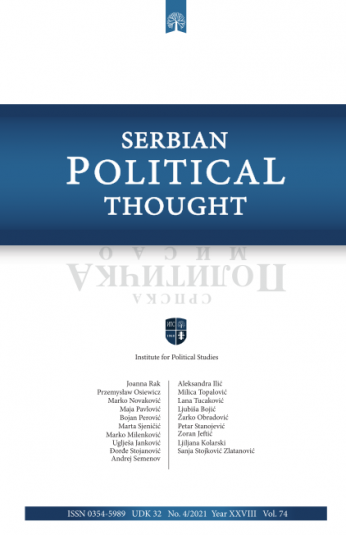