THE LIBERAL CRITIQUES OF DEMOCRACY FROM TOCQUEVILLE TO HERMANN-HOPPE

In my article I would like to analyze a tradition created by Alexis de Tocqueville which Erik von Kuehnelt-Leddihn called “true liberalism.”  According to this political theory, “liberty” and “equality” do not complement each other but are in . . .

MEDIA USE AND HAPPINESS IN SERBIA

The Annual Attitude Examination Survey consisting of 366 questions was deployed on nationally representative sample in Serbia to get 2608 responses on the Oxford Happiness Inventory and Multiple Lickert scale questions concerning attitudes, fears, media use . . .

The key idea of this article is to present a case study of reporting of newspaper BH Dani that were battling the dominant ethno-nationalist style of reporting. Methodologically speaking, this project uses content analysis and the process of developing and . . .

FIRST EXIT POLL IN SERBIA: THE CASE OF VOŽDOVAC

In this paper we will present the results and analysis of the first exit poll that has been done in Serbia, or more precisely, in Belgrade municipality of Voždovac. During election day of the 2020 Serbian parliamentary election, we collected data from 2969 . . .

REFLEXIVITY IN THE STUDY OF WARFARE: IS THERE ADDED VALUE FOR THE DISCIPLINE OF INTERNATIONAL RELATIONS?

The article examines whether reflectivist approach to epistemology in the study of warfare can amend some weaknesses of the rationalist/positivist canon of mainstream International Relations (IR) theories. The author argues for the existence of a new epistemic . . .

CONTROVERSIAL ISSUES REGARDING THE EXTENSION OF THE “NEW START” TREATY: CAN THE USA AND RUSSIA PRESERVE EXISTING STRATEGIC ARMS CONTROL?

Treaty between the United States of America and the Russian Federation on measures for further reduction and limitation of strategic offensive arms (“New START”) is the last pillar of the arms control regime on which the end of the Cold War and the new . . .

Niklas Luhmann articulates the basic elements of his authentic theoretical position as criticism of, as he calls them, classical sociology or classical organisation theory. While within these orientations, (social) systems are mainly interpreted as centralised . . .

THE RELATION BETWEEN POLITICAL IDEOLOGY AND RADICAL ENVIRONMENTALISM

The aim of this paper is examination of general relationship between political ideology and radical environmental activism, with a special focus on considering the extent of influence and the exact position of the politics in the domain of mentioned eco-activism. . . .

Effective environmental protection cannot be imagined without direct management of such protection by state authorities through legal prohibitions and orders, permits, approvals and exemptions, mandatory notifications, control, and repression measures of the . . .

SPACE AND PLACE OF THE BALKANS: A GEOCRITICAL PERSPECTIVE

The literature that explores the representations of the Balkans is based on the assumption that the Balkans were constructed, imagined or invented. This claim is usually accompanied by the attempts to highlight the discrepancy between physical and imaginary . . .

ONE DRAFT OF A POSSIBLE CONSTITUTIONAL ARRANGEMENT FOR KOSOVO AND METOHIJA

The authors will point out some possible models for solving an extremely complex problem, which for decades has been an open issue for which, without much success, a mutually acceptable solution is being sought - Kosovo and Metohija. The paper analyzes three . . .

FREEDOM OF EXPRESSION AND THE RIGHT TO RESPECT FOR PRIVATE LIFE

COSMOPOLITAN DYSTOPIA: INTERNATIONAL INTERVENTION AND THE FAILURE OF THE WEST 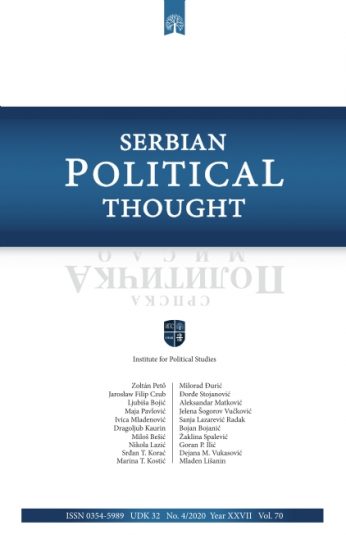