Hunger and food insecurity, despite global initiatives and national welfare actions, remains the key social problem in the 21st century. Due to the economic and migrant crisis and considering that poverty and unemployment represent the greatest risks to hunger, insecure and poor nutrition, satisfying basic human needs for food has involved multiple welfare sectors in Europe in the last decade. Тhe welfare state has traditionally provided support to the poor, with the non-governmental sector emerging as a new provider of benefits. Since establishment of food banks a few decades earlier, the scientists and experts have been considering the dilemma of their impact on the state’s responsibility towards the poor.

Therefore, the goals of the paper are to describe and analyze the characteristics of food banks in the processes of managing and distributing food surpluses, as well as to analyze the positive and negative implications of such redistribution of food surpluses to the poor. Compared to traditional ways of providing support in food such as soup kitchens, food banks operate based on the surplus of food from different sectors of production and trade, performing intermediary role between donors and beneficiaries. Using this position in the system of food recovery process and their logistical capabilities, the aim of these non-profit organizations is to redistribute food to low-income households. Despite humanistic-oriented activities, conducted content analysis in this paper points to conflicting viewpoints on the food banks engagement up to the present.

Food bank opponents have several reasons for objection. The first group can be classified as ideological and value dilemma of state vs. non-state actors providing basic needs. The authors believe that neoliberal discourse has made changes to state support systems for the poor, emphasizing the individual responsibility of the poor, thereby legitimizing the withdrawal of the government intervention. Also, various studies have argued stigmatization and deepening of social exclusion for beneficiaries of this in-kind support. Аdvocates, on the other hand, point to intersecting utilities of redistribution process. Political-economic arguments are based on the fact that redistribution of surplus food is beneficial for both parties ie. win-win situation. Additionally, environmental sustainability and the development of social solidarity are important contributions of food banks to the overall functioning of European societies. Considering all of the arguments mentioned above, we conclude that as long as civil sector role is complementary to the welfare state programs, it can be considered that food banks do not pose a threat to reduction of the welfare state’s responsibility towards the poor and socially excluded. 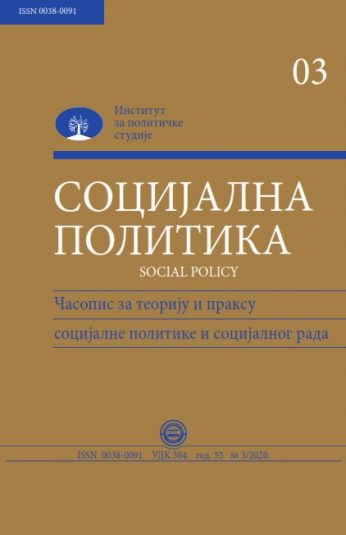