EUROREGIONS – THE FUTURE OF THE EUROPEAN UNION?

The subject of the analysis of this work are Euroregions as specific forms of transnational cooperation in the European Union. Over the past decades, the European Union has been working intensively to implement the principles of decentralization, that is, . . .

NATIONAL MODEL OF DUAL EDUCATION IN THE REPUBLIC OF SERBIA Normative and institutional framework, implementation, challenges, problems and risks

Dual education is a form of secondary vocational education, and duality implies that education and training are implemented in two places, at school and at the employer, i.e. at the training center that corresponds to the certain job. The dual model of education . . .

A NECESSITY OR LUXURY: SEXUALITY EDUCATION IN SERBIA

In the previous period, the sexuality education as a topic vanished from the public discourse in Serbia. Neither political parties nor other societal agents display a particular interest in considering sexuality education. Should we exclude relatively weak . . .

QUALITY OF MERIT SYSTEM, PROMOTION, EVALUATION AND AWARD OF EMPLOYEES

The public service as we know it today is based on a North-Trevelyan report from the nineteenth century that condemned the incompetence of public employees as a consequence of nepotism in the United Kingdom. Reforms followed in the second half of the nineteenth . . .

Public administration represents operations and practice of the government through management, administration and implementation of government policies having in mind public interests and the society as a whole. However, analysis of the political system and . . . 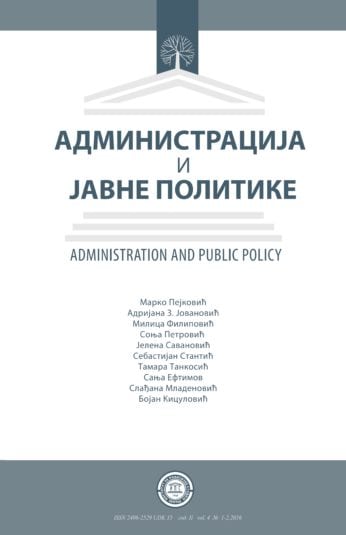