This paper within its limited length encompasses only basic framework for the understanding of this historically and currently well-known region. Writing and rewriting of its history is daily on agenda not only for the scholars, but think-tanks and politicians . . .

GREAT AND SMALL NATIONS AND STATES IN INTERNATIONAL RELATIONS: A REVIEW OF RELATIONS AND CHARACTERISTICS OF SIZE IN GEOPOLITICS

The author looks at several features of the relationship between large and small nations and states at the international level. Since this plan, among other things, can be understood as political, ie geopolitical, the author points to the continuous action . . .

SECURITY STRATEGIES OF SMALL STATES IN THE CONTEMPORARY WORLD: THE CASE OF SERBIA

Contemporary study of the possibilities of small states to resist security threats has come a long way from the understanding that it comes down to the classical policy of balancing and developing their own military potentials. This was contributed by the . . .

Globalization did not make states unnecessary. On the contrary, in order for people to successfully take advantage of the opportunities offered by international integration, they need a state at both ends of their transactions. Weak, disordered and corrupt . . .

GEOPOLITICS AND ENERGY SECURITY OF THE BALKAN STATES

The end of the 20th and the beginning of the 21st is characterized by numerous challenges in all fields. Limited resources and the need for energy have taken their place among the key factors in creating the international policy of all countries around the . . .

The cooperation between the Russian Federation and the People’s Republic of China has been developing since the end of the Cold War, but they were not in the foreign policy focus of one another. The Ukrainian Crisis in 2014 changed this situation. As a consequence . . .

IMPACT OF SAUDI COALITION ON THE NATIONAL SECURITY OF YEMEN

In this paper, the authors analyzed the extent of impact of the Saudi Coalition on the internal political, and consequentally the national security of Yemen. The innitial goal of this research is the analysis of motives of Saudi Arabia for engaging in the . . .

INFLUENCE OF „WOKE CULTURE” ON SECURITY OF CENTRAL AND EASTERN EUROPE

This paper intends to research the causality between evolving cultural models of the West and societies of Central and Eastern Europe, which accepted and emulated these models ever since the Cold War ended in a desire to be integrated into the West as they . . .

In this work, we will seek to show the continuity of Anglo-Saxon geopolitical doctrines and the strategy of American conquest and militarization of Eastern and Southeastern Europe in a time continuity from the beginning of the Cold War to the present. In order . . .

INDUSTRIAL ESPIONAGE IN CASE OF CHINA AND USА

Industrial espionage, especially in the form of intellectual property theft, generates billions of dollars profit, and thereby its importance in the modern world is increasing. The scandal regarding the company Huawei has showed the complexity of the issue. . . .

FUNCTIONS OF THE STATE IN THE BUILDING OF SECURITY SYSTEM

At the beginning of the 21st century, as before, security is the first and basic concern of the state, of modern interpretation of political theories and international relations. The establishment of national policies as a security policy implies thinking . . . 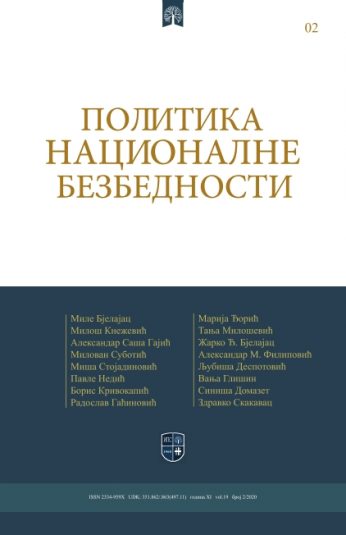