Romanian Prime Minister Gheorghe Tătărescu in the Capitals of the Little Entente: Belgrade (1936) and Prague (1937)

The present article presents certain aspects of the relations between Romania, the Czech Republic and Yugoslavia in the interwar period. The fourth decade of the last century in particular was extremely rich in political, diplomatic and military events. Within . . .

Electoral Management in the Western Balkans – Overview of Institutional Setting

Countries of the Western Balkans (WB) – former federal units of Socialist Federal Republic of Yugoslavia and Albania have undergone a lengthy and complex process of democratisation from late 1980s. Free and fair elections are among the cornerstones of democratic . . .

The purpose of this paper is to provide answers to the questions why health is viewed through the lens of national and international security, and what might be the potential role of the armed forces in strategic response to health security challenges. Relying . . .

Leisure Patterns and Values in Adolescents from Serbia born in 1990s: An Attempt at Building a Bridge between the Two Domains

This work is an attempt at empirically establishing a relation between leisure and values in adolescents. Being new, this topic could help a broader understanding of youth leisure and its association with inner psychological dispositions, but also with specific . . .

Negative perceptions of Russia as “the Other” in societies belonging to the Western political tradition have been shaped in a long historical perspective and have their own cultural and geopolitical matrix. These stereotypes mostly perceive Russia and . . .

Theoretical frameworks for constructing a model for analysis of Islamic discourse on YouTube: one view from Serbia

The starting point of this paper an assumption that videos on the YouTube Internet portal relating to Islam produce intolerant and radical discourse that may be a factor of radicalization through their contents, the ways of  the shaping of the content, and . . .

The adoption of the Act on Prevention of Domestic Violence was driven by the creation of a more effective legal framework for the protection of victims of domestic violence, and, therefore, also by the alignment of the legal system of the Republic of Serbia . . .

As the loss of Kosovo has been de facto re-inflicted in recent years, the question should be raised as to how great an influence the Kosovo myth wields today. It is particularly interesting to consider the issue in the context of European integration and the . . .

Strike And Power(Lessness) Of The Union

The aim of this paper is to identify, on the basis of an analysis of the causes, the course and effects of strikes in Serbia over the last three decades, the mechanisms by which society and trade unions have moved from self-management mythology to the defense . . .

From Socialist Modernization to Chinese Dream

The Many Faces of Realism 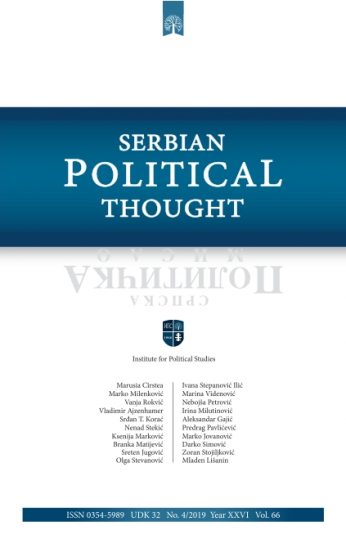