THE CARTEL PARTY MODEL, TENDENCIES OF POLITICAL CARTELIZATION, AND SERBIA IN A COMPARATIVE CONTEXT

FAMILY THROUGH PROGRAM POSITIONS OF THE POLITICAL PARTIES IN SERBIA: AN OVERVIEW OF THE SECOND DECADE OF THE 21ST CENTURY

Practically all parties in Serbia opt for a pro-birthrate policy, whereas some of them do it although there is a positive birthrate in the area of their acting (e.g. Muslim parties in the region of Raška). This is also understandable since Serbia is faced . . .

LEGAL ANALYSIS OF THE LATEST CONSTITUTIONAL AMENDMENTS IN THE RUSSIAN FEDERATION

In the Russian Federation, a set of constitutional amendments was adopted in a referendum in July this year. Having in mind the fact that Russia is one of the most important countries in the world, there is a scientific and social need to study the adopted . . .

There is a noticeable increase in Poland’s engagement with the Western Balkans. This research aims to explore the compatibility of the EU priorities in the region and Poland’s national interests. Embedded in the concept of raison d’etat and the realist . . .

The undertaken relational analysis of the core concepts underpinning the practical roadmap for the process of systemic establishment of regional sustainable development policy and coordinated use of structural instruments starts from the assumption that the . . .

The paper analyzes the possibility of closer integration given to the countries of the Western Balkan by a new EU enlargement methodology. On February 5, 2020 the European Commission issued Communication proposing to the European Parliament, the Council, the . . .

PANDEMIC OF FEAR AS A BIOPOWER OF THE “GLOBAL GOVERNANCE” SYSTEM

We are faced with biocontrol of the whole society imposed by the invisible centers of power which, through networked activities through various but connected organizations, want to unite their activities globally under the pretext that the world is not prepared . . .

In line with Epstein’s model of the school-parent partnership, this paper discusses international experience and situation in educational system in Serbia in terms of parental participation in the prevention and intervention of school violence and bullying. International . . .

THE COMPLEXITY OF CORPORATISM AND DIFFICULTIES FOR ITS UNDERSTANDING AND DEFINING

Corporatism is a complex political phenomenon, long-lasting, highly diverse, and with many shapes and facets. This complexity causes various difficulties in its understanding and defining, as well as various approaches to it. This article compares six distinguished . . .

ON THE NOTION AND LEGAL NATURE OF THE UNSUCCESSFUL INCITEMENT

In the Serbian criminal legislation, as well as in most foreign legislations, the starting point is that under certain conditions, the instigator who unsuccessfully induces another to commit a crime also deserves punishment. Criminalpolitically, the punishability . . .

In the European theory of contract law, division of legal systems into open and closed has been recently introduced, according to whether they provide special rules on unilateral revision of contract due to changed circumstances, or not. The open systems contain . . .

THE ORIGIN OF THE CRIME OF DEFAMATION

According to the dominant view among scholars of Roman law, a public delict protecting the honour of Romans existed in the Twelve Tables. Allegedly, it was later modified by Sulla’s legal reform at the beginning of the first century BC. The aim of this paper . . .

POLITICAL-SOCIAL BASIS ON THE RIGHTS TO EUTANASIA

The problem of euthanasia is a contact area of ethics, law and politics. In this text, which seeks to contribute to the expert public debate on the introduction of euthanasia into Serbian legislation, the term terminology - euthanasia (as a Right to Die with . . . 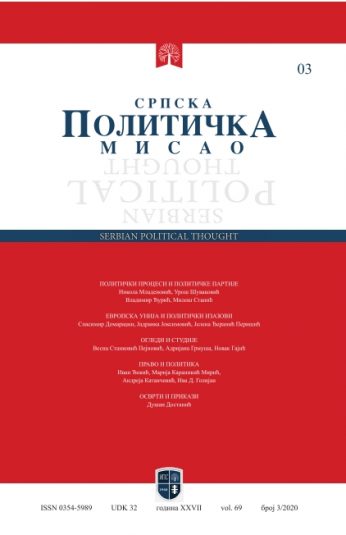