THE PROBLEM OF KOSOVO AND METOHIJA IN THE INTERNATIONAL CONTEXT

The genesis of regional cooperation in the Western Balkans over the past two and a half decades has had different stages, with long-term crises and problems related to the development of its own concept. Therefore, in this paper, the authors have analysed . . .

THE ATHONITE MODEL: NOT APPLICABLE IN KOSOVO AND METOHIJA

Greater Albanian irredentist activity between the two world wars had the strong support of fascist forces, interested in breaking up the newly formed Yugoslav state. It was in the first place fascist Italy and the Third Communist International (Comintern) . . .

The paper analyzes the state and structure of the economies of the Western Balkans, their characteristics, as well as their mutual influence, which is primarily expressed through the foreign trade within the CEFTA 2006 agreement. The author gives a comparative . . .

Dealing with the state is as old as the state itself. Its origin, development and constitutional structure show the extent to which the state issue is important in theoretical thought. There are a large number of topics in the literature that try to explain . . .

THE CONCEPT OF SOCIAL JUSTICE AND THE DESIRE FOR POWER

ASIAN-PACIFIC AND THE SINO-AMERICAN RIVALRY

In the following text authors analyze the growing tendency of Sino-American rivalry to further spiral out of control and potentially lead to deterioration of countries’ future relations. The rivalry is especially evident in the region of Asian-Pacific which . . .

Year 2019 brought peculiar situation to a small Latin American state of Venezuela. A legally elected president Nicolas Maduro governs the state, while more than 50 countries in the world – including the United States and most of Venezuelan Latin American . . .

ABUSE OF ARTIFICIAL INTELLIGENCE FOR EXTREMIST AND TERRORIST PURPOSES

In this paper, the authors research possible abuse of artificial intelligence for extremist and terrorist purposes. Having the growing digitalization and robotization of the society in mind, it is completely realistic to be expecting a growing abuse of artificial . . .

The liability of States for pecuniary damage caused by a violation of the rights guaranteed by the Convention requires the cumulative fulfillment of three requirements. These requirements are not explicitly set out in the Convention but have been formulated . . .

ETHNOGENESIS, IDENTITY AND DEMOGRAPHIC DEVELOPMENT OF THE VLACHS IN SERBIA

On the ethnic map of Serbia, the Vlach ethnic community occupies a special place, specific in many of its characteristics (origin, language, tradition, customs, demographic development, etc.). The paper studies the ethnogenesis of the Vlachs, through the prism . . .

EUROPE IN FRONT OF POLITICAL MIRROR 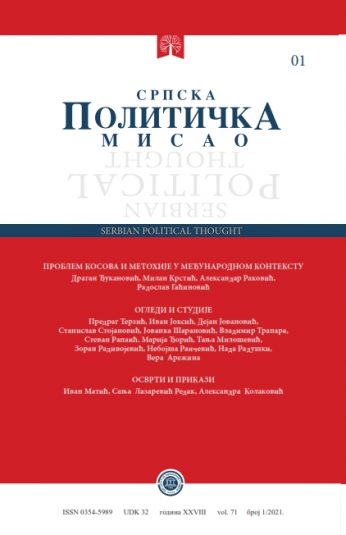