STATUS AND FLOWS OF NATIONAL POLITICS

DAYTON, THE END OR RETURN OF POLITICAL BALANCE

The coronavirus pandemic that shook the world in early 2020 caught Bosnia and Herzegovina at the beginning of a sharp political and scientific debate on the need to revise the Dayton Peace Agreement on the one hand and its defense and affirmation on the other. . . .

The article deals with Kosovo policy of the Serbian parties during the early 2000s. A majority of the mainstream parties supported the idea of fixed borders in the Balkans. They also supported the policy "standards before status", according to which the final . . .

Organizational culture has a great influence on the efficiency of the organization and its values ​​initiate or prevent innovation. Innovations in military activity are key to the development and maintenance of military, and military power is crucial for . . .

SIGNIFICANCE OF THE DIASPORA STUDIES

In the era of globalization, the international spatial and social mobility processes are intensified, according the fact the World become diasporical. We are faced with the expansion of global migration phenomenon in the 21st century. The science and researchers . . .

As one of the youngest countries in Europe, Montenegro is a particularly interesting example of how a symbolic competition between two nation-building projects takes place in the political context. The issue of Montenegrin national identity has been at the . . .

Italian policy in South and East Mediterranean could be understood best by applying the Italian neoclassical school of geopolitics. Author first explaines validity of this approach among other possible theoretical backgrounds. He adopts content analysis, economic . . .

The revitalized power of Germany after unification, according to the forecasts of neorealists, necessarily implied the aspiration to establish itself as a central power in Europe. As the neorealist predictions of the "Balkanization" of Europe were not materialized, . . .

The article discusses the problem of ethnical nationalism, also known as irredentism, as a flagrant problem that requires urgent and concerted actions of the world community. The article is subdivided into the introduction and four parts. The first part focuses . . . 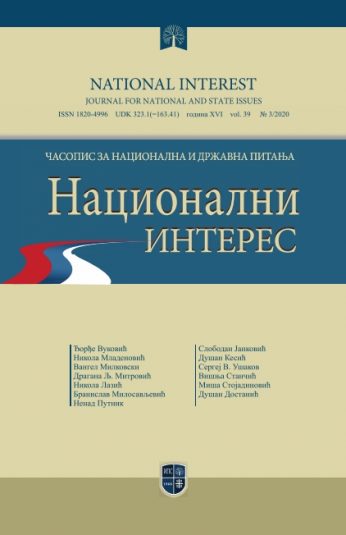